The ‘Thriller Villa’ hits the market for $9.5m

Pop legend Michael Jackson was perhaps just as famous for his lavishly eccentric lifestyle as he was for his music, and while he may be forever associated with his Los Angeles home of Neverland, with its private fairground, zoo, and replica schoolhouse, another of his former residences offers a revealing insight into his daily life away from that LA bubble of fantasy.

Recently placed onto the market and clocking in at a cool $9.5m, the erstwhile King of Pop’s Las Vegas base offers impressively opulent luxury even by the standards of a city not known for its sense of restraint.

Dubbed the ‘Thriller Villa’, the Palomino Lane compound is spread across 1.7 acres of land behind an iron gate and imposingly high walls. It boasts over 27,000 square feet of living space, decorated with the extravagance you’d expect from a man who once gave his four-year-old son $20,000 in cash for a single trip to the mall.

The property is offered for sale fully furnished, and this includes several original paintings of the man himself, as well as a gilded grand piano in the Salon Room, reportedly Jackson’s favorite room in the whole complex and something of a shrine to performer’s career and fame.

Although the mansion, built in 1952, is described in the realtor literature as being ‘Spanish-Mediterranean’ in style, the overall atmosphere is perhaps more suggestive of a small Mexican village, with its central hexagonal courtyard paved in cobbled stone, its dramatic bell tower, and its variety of large and small fountains. The outdoor area is touted as an ideal venue for corporate events, weddings, or other large gatherings requiring a stylish setting.

Also appropriate for weddings, the estate boasts its own medieval-style, two-storey chapel with seating for 74 guests, hand-painted sky scenes on the ceilings, and a magnificent chandelier to provide the finishing touch. The acoustics in the chapel are said to be ‘pitch perfect’, with suggestions that the musical history of the building may live on through conversion into a recording studio.

For such a well-appointed residence, the number of bedrooms is surprisingly small – just four – although this might be explained in part by Jackson’s famously obsessive sense of privacy. Perhaps more pertinently, the available guest space was reduced by the singer devoting the entire upper floor to his own personal suite, including a huge master bedroom complete with mini-bar area, a bathroom larger than many whole condo apartments, a lounge room, and a private sitting room with a second more extensive bar area.

The building is completed by an 8,500-square-foot basement area containing a full, luxury guest suite complete with kitchen, along with secluded access to a garage area which Jackson used to discreetly enter and exit the property away from the ever-present gaze of the paparazzi.

Few people would consider the property’s price tag of $9.5m to be pocket change, but for an estate of this size and luxury, it seems surprisingly low. Whether it’s snapped up by a Vegas high-roller jaded by the best suites the Strip has to offer, or bought for development as a corporate venue or luxury hotel, this sale provides a tantalizing glimpse into the heady lifestyle of one of pop’s most famously spendthrift sons. 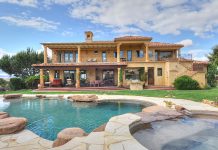 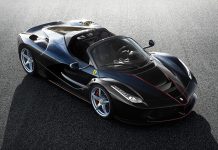