The SIAR (Salón Internacional de Alta Relojería or International Fine Watchmaking Fair) was held in Spain for the second consecutive year at the Palacio Miguel Ángel, Madrid, from 11th to 14th June. An exquisite selection of timepieces was presented by the world’s leading watch manufacturers.

“Sharing the passion for finest Swiss watchmaking” is Montblanc’s guiding principle when it comes to horological topics. As an horological highlight in the Heritage Chronométrie Collection, Montblanc’s new ExoTourbillon Minute Chronograph combines two of the most important chronometric complications: a chronograph to measure the duration of brief intervals and a patented tourbillon construction for absolute precision with second stop.

The Heritage Chronométrie Collection’s venture into the world of aesthetics, exemplified in the Montblanc ExoTourbillon Minute Chronograph model: Thoroughness and meticulous attention to detail are omnipresent in this grand complication watch, that was first presented in Geneva in January 2015. Montblanc brought watch enthusiasts all the passion and beauty that traditional watchmaking can offer, and in return received the people’s choice award at SIAR.

Montblanc debuted the patented ExoTourbillon mechanism, which was completely developed and built in the Manufacture in Villeret, as part of the Collection Villeret in 2010. Five years later, Montblanc returns to this complication to integrate it into Montblanc’s own monopusher automatic chronograph calibre in the Heritage Chronométrie Collection.

As a consequence of the architecture of a classically constructed movement, the balance’s centre of gravity temporarily strays from the axis of rotation due to the influence of Earth’s gravitational force, which is particularly troublesome when the timepiece is in a vertical position.

A tourbillon mechanism compensates for this centre-of-gravity error by enclosing the escapement inside a carriage or cage that continually rotates around its own axis. Gravity’s accelerating effect during the first 180 degrees of the carriage’s rotation is offset by a corresponding deceleration during the second 180 degrees, so the watch’s average rate remains constant.

The cage is smaller than the balance, which oscillates outside the rotating carriage and on a higher plane. The screw balance is borne between two jewels, while the tourbillon is neither cantilevered nor sandwiched between two bridges, but turns in a two-point bearing at the foot of its staff. The advantage of this construction is that a smaller rotating cage has less mass so it needs less energy to support its rotary motion.

Compared to a traditional tourbillon construction, energy savings of approximatively 30% are achieved, while at the same time increasing the precision. This innovative construction derives its name from the Greek prefix “exo”, which means “outside” or “external”.

With this patented ExoTourbillon construction, Montblanc offers for the first time a stop-second function that directly halts the screw balance by means of a tiny spring. Such a construction rarely accompanies a tourbillon and is very useful whenever the wearer wishes to precisely set not only the hour- and minute-, but also the second-hand.

This innovative Tourbillon construction is integrated in Montblanc’s own in-house developed chronograph calibre that combines all the elements of a traditional chronograph with a contemporary highly performant construction: monopusher with column wheel, efficient and precise vertical coupling, automatic winding and two barrels. Two semicircular counters with hands of different lengths to match the appropriate sectorial scales, enable the Heritage Chronométrie ExoTourbillon Minute Chronograph to tally elapsed seconds and minutes.

These counters are embedded on two levels into the complexly designed and elaborately crafted dial, which also bears six facetted, applied, red gold indexes. The aesthetically appealing surfaces are styled with refinement and crafted with much love for detail. The date is indicated by a hand which extends the dial’s centre. The tip of this hand points to the current date on circular grey scale.

The hour-hand can be reset in hourly increments, thus ensuring quick and uncomplicated time setting, for example, when travelling. Repositioning the hour-hand has no effect whatsoever on the minute- and second-hand, so the precise time is always preserved. To set the date display, the user advances or retreats the hour-hand through 24 hours. Whenever this hand’s tip passes the 24th hour, the hand of the date display either advances or retreats accordingly.

Different from the other models in the Heritage Chronométrie Collection, the Montblanc ExoTourbillon Minute Chronograph relies on a slightly different case construction. The bezel is not flat, but concave, which creates an attractive aesthetic effect and simultaneously protects the bezel against scratches.

The facetted horns are satin-finished on the inside and polished on the outside. Montblanc’s Emblem, crafted as a distinctive relief atop the crown is a distinguishing feature of the entire collection. The leather strap is made at the Montblanc Pelletteria, the Maison’s own leather manufacture in Florence, Italy. This timepiece is available in a 44-mm-diameter case crafted from 18K red gold. 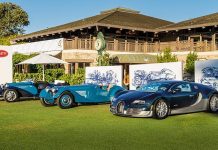 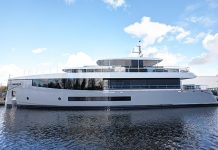 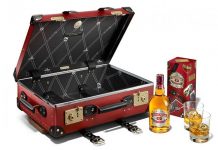 Introducing Chivas 12 ‘Made for Gentlemen’ by Globe-Trotter