Ulysse Nardin opened the doors to the brand’s largest boutique in the world at the Dubai Mall.

Swiss luxury watch manufacture Ulysse Nardin and its exclusive retail partner in the UAE, Bin Hendi Enterprises marked a new chapter as they officially opened the doors to the brand’s largest boutique in the world at the Dubai Mall under the patronage of H.H. Sheikh Mansoor Bin Mohammed Bin Rashed Al Maktoum.

Spanning 240 sq. m, the launch of Ulysse Nardin’s biggest boutique was held subsequent to the brand setting up its office in Dubai. Another highlight heralding the launch was the exhibition held between the 28th and 31st of January at the Dubai Mall wherein Ulysse Nardin’s exceptional musical marvel, the ‘Vivaldi’ watch was showcased in a first preview before it makes its official debut at forthcoming watch fair, Basel World 2015 in March.

“We are thrilled to be opening Ulysse Nardin’s biggest boutique in the world with our esteemed and long-standing partners, the Bin Hendi Group. Dubai is one of the most prime retail destinations in the world and the perfect dwelling for Ulysse Nardin’s biggest boutique thus also reinforcing the importance of Dubai and the Middle East market and patrons to the brand.”said Mr. Patrik

In true Ulysse Nardin style and elegance, the boutique opening witnessed the attendance of select media and VIP guests from the region. Known to do things differently and tastefully, Ulysse Nardin paid tribute to its nautical history by hosting a rope unknotting in lieu of the usual ribbon cutting.

After the official inauguration was completed, guests were treated to some elegant edibles as a violinist regaled them with delicate tunes. They were then escorted to the exhibition that took place at the Grand Atrium of the Dubai Mall. Here, a 10X10m stand held the delightful and revolutionary Vivaldi timepiece, serial # 1 out of 99, and other innovative pieces, also offering visitors information and exclusive glimpses into the world of Ulysse Nardin.

Ulysse Nardin’s biggest boutique also features a dedicated section and specialized watchmaker who will provide effectual customers service to Ulysse Nardin’s clients whenever required. As guests feasted their eyes on Ulysse Nardin’s pioneering blend of innovation and beauty at the recent boutique launch and exhibition, it is evident that the brand is all set to enrich its long history and mark many more milestones in the coming years. 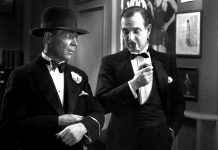 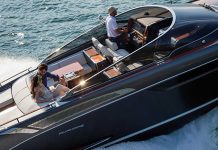 A New Speedboat is Born: Introducing the Rivamare 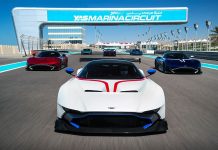 First customers experience the exhilaration of their own Aston Martin Vulcan